Only caps? The two Norwegian brothers, Alex and Sebastian, have gotten used to this question ever since they launched their cap brand in 2013. 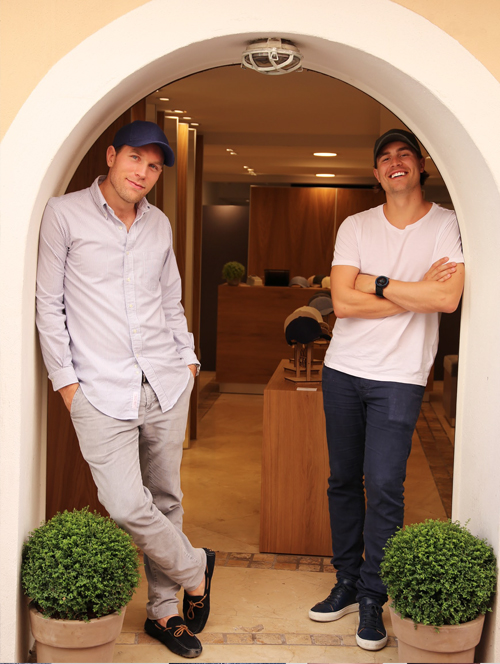 “Our idea was simple, we wanted to make the perfect cap. A cap that shared the same quality and finesse as the rest of our clothes”, says Sebastian, the older brother. Alex elaborates further, “if you want to be the best, you need to focus and that’s why we only do caps”. After a somewhat humble beginning in a side street in Oslo, the brand quickly gained popularity in Norway and is today well recognized, retailing in the most exclusive stores in Norway.

DREAMING BIGGER
The success in Norway gave Alex and Sebastian the confidence to dream bigger. After spending many summers in their grandfather’s apartment in Port Grimaud growing up, they thought their concept might work in Saint-Tropez.

“We were actually in Saint-Tropez last spring for a photoshoot when we found the perfect store, and decided we just had to go for it”, explains Alex. Within two months they had to set up a French company, design and build a shop interior and recruit four new employees. “We actually assembled the store ourselves over a period of three days and nights and opened just in time for the summer season” says Sebastian while showing us around the St-Tropez store.

Considering that Saint-Tropez is one of the most expensive places in the world to rent a shop, the concept had to be a huge success for the store to survive. According to Alex, “customers really seemed to share our passion and recognise the work that we have put into our products. So we are very grateful that we can open again for our second season.” The brothers use some of the best fabrics available including Italian linen, cashmere, leather, etc. The caps come in a broad range of sizes from extra small to extra large. •

By continuing your navigation, you accept the use of third-party services that may install cookies Personnaliser

In accordance with the European Data Protection Regulation, we invite you to consult nos which detail the personal data we collect, their purpose and their retention period. In order to enable you to make full use of the services offered by our website, you must accept our terms of use.